High Redshift Galaxies May be Clusters of Galaxies

Astronomical observing techniques have much improved the last decade. Objects in the faraway universe are spotted at redshifts up to z=12. Within big bang cosmology no objects can be older than 13.7 billion years. However, the light from objects with a redshift of z=12 may have travelled 140 billion years through the universe with tired light redshift instead of expansion redshift. Big bang astronomers mark certain objects in their early big bang universe as galaxies. A substantial part of those big bang galaxies may turn out to be clusters of galaxies in an infinite universe if distances are much further away.

Over the last decade more and more scientists have argued that cosmological redshift may be caused by the interaction of photons with small particles, for instance gravitons. This way of reasoning, with light steadily losing energy while travelling across large regions of extragalactic space, is called a tired light theory and was first advanced by Fritz Zwicky in 1929. The tired light concept, or tired light redshift, can be used as part of a model that looks at the universe as infinite in time and space.

Big bang astronomers reported that in a couple of cases these early big bang galaxies are nearly as massive as galaxies we see around us today, which was surprising for the team because big bang theory predicts that galaxies start small and grow by colliding and merging with other galaxies1. Perhaps the team mistook clusters of galaxies for individual galaxies.

Figure 1 shows the X-ray image2 of the galaxy cluster Abell 2029 at a distance of one billion light-years. Abell 2029 is composed of thousands of galaxies enveloped in a gigantic cloud of hot gas. At the center is an enormous, elliptically shaped galaxy. 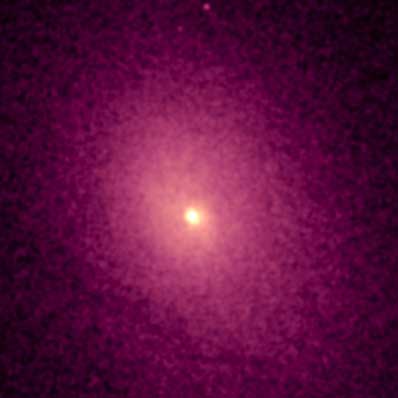 Figure 2 shows X-ray images3 of two objects, 4C41.17 and 3C294. The left object is reportedly at a distance of 12 billion big bang light-years and the right object is at a distance of 10 billion big bang light-years. (Though, those distances are not correct, for the light was emitted 12 and 10 billion years ago according to big bang cosmology. The distances are further away in the big bang model, because the big bang universe has expanded. Still, for here it is all right to think in the mentioned billions of big bang light-years.) Within an infinite universe these objects may be at a much larger distance. Big bang astronomers take the two objects for two massive galaxies, but these objects may turn out to be clusters of galaxies (like Abell 2029 in Figure 1) in an infinite universe instead of individual galaxies in a big bang universe. If the galaxy cluster, Abell 2029 shown in Figure 1, was at a distance of 11 billion big bang light-years then perhaps big bang astronomers would have taken it for an individual galaxy too. Perhaps then Abell 2029 would have looked as 4C41.17 in Figure 2. 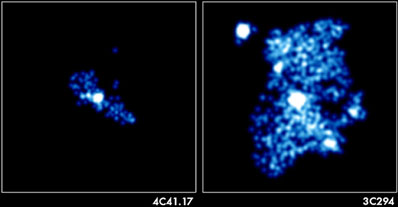 In January 2005 big bang astronomers presented new evidence of giant galactic blobs at a distance of 11 billion big bang light-years. Blobs were first discovered about five years ago with visible-light telescopes. Big bang astronomers see the blobs as intensely glowing clouds of hot hydrogen gas that encapsulate faraway galaxies. The blobs being about 10 times as large as the galaxies they surround. Astronomers can see glowing blobs, but they don't know what provides the energy to light them up4. 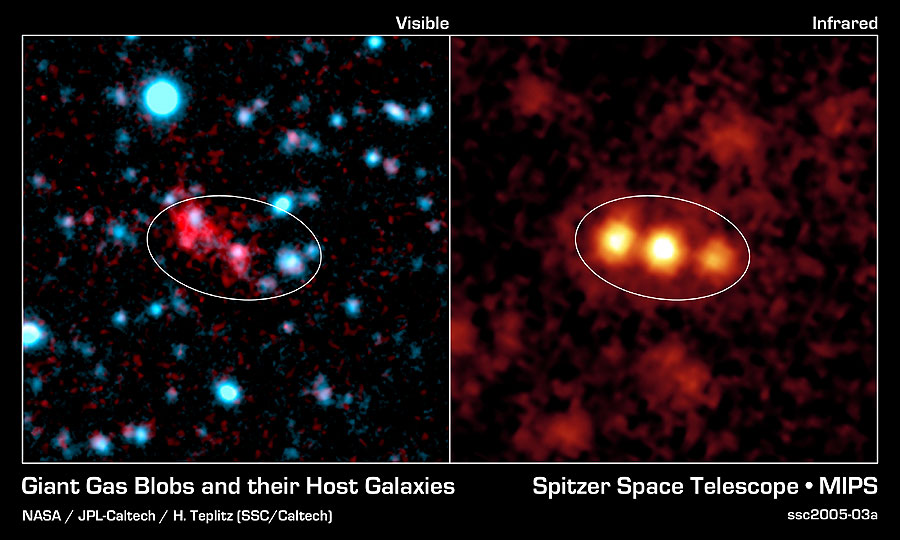 In Figure 3 a blob is shown in infrared (red colour) in the right picture4, with three galaxies in yellow in the center. Big bang astronomers think they are far from solving the mystery of the blobs and so far, their observations only deepen the mystery. They not only consider the tremendous clouds of material to be bizarre but also wonder why the blobs contain some of the brightest galaxies in the universe4. Perhaps they should consider these blobs to be clusters of galaxies at a much greater distance. Perhaps the 3 yellow spots (infrared light) in the right picture of Figure 3 look as the 3 biggest white spots in the right picture of Figure 2 in X-ray light.

In an infinite universe, clusters may look like low surface brightness, irregular-peculiar galaxies as they are very far away. The Hubble Space Telescope may have observed such clusters. 57% of the objects in the Hubble Deep Field picture of December 1995 are irregular-peculiar objects compared to 1.4% irregulars for nearby galaxies5. Richard Ellis studied the Hubble Deep Field in detail and found a large number of a new kind of low surface brightness, irregular-peculiar galaxies5, which may turn out to be clusters of galaxies within an infinite universe.

Last year new pictures made by the Hubble Space Telescope were published, the so-called Hubble Ultra Deep Field pictures. These pictures show objects with a redshift range of 7 to 12. These supposedly single galaxies have a variety of size, shape, and colour. Big bang astronomers say there is a zoo of oddball galaxies littering the field. Some look like toothpicks, others, like links on a bracelet6. However, these pictures may show clusters of galaxies rather than single galaxies, as clusters can have a greater variety. By extrapolating, a redshift range of 7 to 12 would give a distance of 82 to 140 billion light-years.

When faraway clusters are mistaken for galaxies then you have a point where big bang astronomers switch from seeing clusters, to seeing single galaxies. This may be at a distance of 7 billion big bang light-years, i.e. the moment they now think that the star birth rate quickly dropped to one-tenth of its earlier rate, and the moment they think big bang galaxies stopped increasing.

The same team also measured that galaxies with high redshifts show oxygen abundances two times lower than present-day spirals8. This may be because they mistook clusters for galaxies and therefore may have found a lower concentration of oxygen for their early big bang galaxies.

Luminous Infrared Galaxies are a subset of galaxies whose infrared luminosity is larger than 100 billion times the luminosity of our Sun. The same team discovered that contrary to the local universe where such galaxies are very rare objects, at a redshift from z=0.4 to z=1 which is 4,0 to 8,0 billion big bang years ago, roughly one sixth of bright galaxies were Luminous Infrared Galaxies8. Finding more of these galaxies between 4,0 and 8,0 billion big bang years ago may be because clusters were mistaken for galaxies. Though, up to 7 billion big bang light-years ago, i.e. at a redshift of about z=0.7, the situation still may be acceptable. Astronomers have found evidence that the number of clusters at 7 billion big bang years ago is little different from that of today9. However, when the distance is larger than 7 billion light-years it is likely they have estimated the number of clusters incorrectly.

In January 2004 a team of big bang astronomers announced that they had found embryonic galaxies a mere 1.5 billion years after the big bang. They think the galaxies reside in a still-developing cluster, which they called the most distant proto-cluster ever found. The discovery of the most distant proto-cluster ever found baffled big bang astronomers, because until then, it wasn't thought clusters could exist so early in the big bang universe10. Their embryonic galaxies may be clusters of galaxies. The galaxies with a redshift of z=4.1 that, according to big bang astronomers, existed more than 12 billion big bang years ago, are supposed to be so young that the astronomers think they can still see a flurry of stars forming within them10. Those flurries of stars may instead be galaxies within the clusters. The team of astronomers think that the galaxies are grouped around one large galaxy, but perhaps what they really see is a supercluster with clusters of galaxies surrounding one major central cluster.

In July 2004 big bang astronomers reported that they had done the most comprehensive survey ever, covering the bulk of the galaxies that represent conditions in the early big bang universe. They expected to find basically zero massive galaxies beyond about 9 billion big bang years ago, because their theoretical models predict that massive galaxies form last. Instead, they found highly developed galaxies that just shouldn't have been there according to their theories, but are11. However, within an infinite universe one expects to find the same galaxies at large distances as nearby. Though, it remains to be seen if those highly developed galaxies are galaxies indeed and not clusters of galaxies.

In big bang cosmology astronomers used to think the early big bang universe was a pretty simple place containing relatively small, blue/white-star-forming galaxies. In March 2005 astronomers reported that at distances of 10 to 12 billion big bang light-years they are now not only seeing blue and white galaxies with lots of dust and blue and white galaxies with no dust but also big and red galaxies with lots of dust and big and red galaxies with no dust, much to their surprise. There is as much variety in the early universe as we see around us today, was their conclusion12. Within an infinite universe one expects to find the same variety of galaxies at large distances as nearby. To big bang astronomers, faraway galaxies, which may be clusters, appear different to galaxies nearby because of their possible misconception of the distance and nature of these objects.

In December 2003 an international team of astronomers thought they had determined the colour of the early big bang universe. While the universe is now a kind of beige, it was much bluer in the distant past, at a time when the big bang universe was only 2,5 billion years old15. The universe at large distances may only appear to be bluer. The studied distance of the universe may be much further away than is currently accepted. Therefore bright blue hotter regions may outshine the less hot regions more than in the nearby universe. The same happens with Blue Compact Dwarfs, these galaxies have a concentration of bright blue stars and are better-seen at large distances than normal galaxies.